BookPeople is proud to partner with the Austin American-Statesman for our monthly Statesman Selects program. Each month, we get together to select one book you absolutely must not miss. The Statesman Selects pick for March is the debut novel by Austin author Jill Alexander Essbaum, Hausfrau. Pick up a copy of the Statesman on Sunday, March 22 to read their review. Join us here at BookPeople on Wednesday, March 25 at 7pm when Essbaum reads from and signs Hausfrau here at BookPeople.

Hausfrau hits our shelves tomorrow, March 17. We’ve been looking forward to sharing this novel for months. This is a story that’s difficult to put down, a portrait of a wife and mother colliding with desire, despair, dissatisfaction, Swiss culture, and the directions of her own decisions. This is a consummate book club pick, a story you MUST discuss as soon as you’ve turned the last page. Book clubs may want to pair it with Anna Karenina and discuss the two Annas side by side.

Love her or hate her, Essbaum’s Anna elicits a strong reaction from readers. That has certainly been the case for our booksellers:

Consuelo (who took the lovely picture above):

“Essbaum writes with startling clarity in this novel about the pain of being human. I found myself dog-earing and underlining Anna’s self revelations as she navigates her rocky marriage. Each turn of the page is cruel and powerful.”

Julie (who stole the beautiful picture above from Consuelo’s facebook page):

“Essbaum sucked me into the story of Anna, an unhappy American woman living in Switzerland. A wife and mother without her own car, bank account or job, Anna’s desperation (and readers can discuss to what extent that desperation is self-defined and self-prescribed) manifests itself in extramarital affairs and conversations with her Jungian psychoanalyst. Essbaum shifts back and forth between these conversations, trysts and Anna’s daily experience and memory at a brilliant pace. We are constantly quilting an understanding of Anna by what she reveals of herself, both intentionally and unintentionally, in the doctor’s office and in her own mind and life. She is a sympathetic, selfish, complex, infuriating, fascinating character who had me mulling female sexuality, self-determination and self-destruction. Book clubs should read this book alongside Anna Karenina. I wanted to talk about it as soon as I turned the last page.”

The final cover of Hausfrau is striking and sure to grab eyes from the shelf. 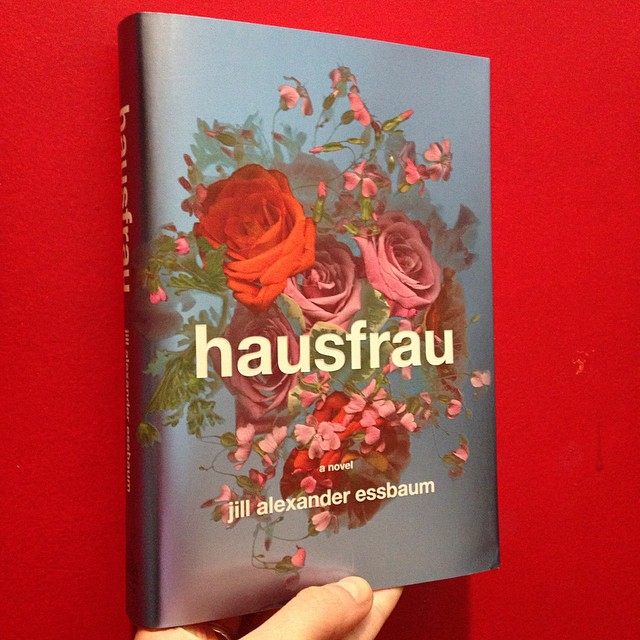 Random House, the book’s publisher, recently shared this video documenting the many, many covers Hausfrau tried on before stepping out into the world.

Publisher’s Weekly gave Hausfrau a starred review, saying, “The realism of Anna’s dilemmas and the precise construction of the novel are marvels of the form, and Essbaum chooses her words carefully….This novel is masterly as it moves toward its own inescapable ending, and Anna is likely to provoke strong feelings in readers well after the final page.”

Essbaum spoke to The Wall Street Journal about the process of writing Hausfrau, her own experience living in Switzerland and writing the divisive character of Anna: “If I’ve managed to write a character that somebody can’t stand and yet can’t look away from, then I think I’ve put in a good day’s work maybe.”

We hope you can join us Wednesday, March 25 at 7pm when Essbaum is here to speak about and sign her novel at BookPeople. If you can’t make it, you can order a signed, personalized copy of Hausfrau via bookpeople.com. We ship all over the world.