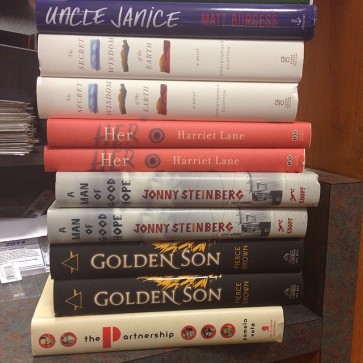 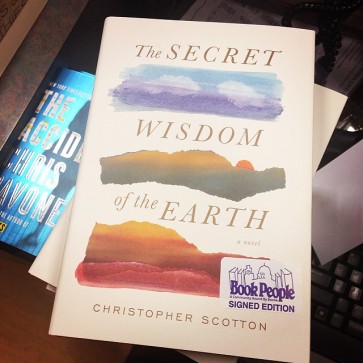 Descent by Tim Johnston
Staff Pick! Staff Pick! Staff Pick! For eighteen-year-old Caitlin, the Rocky Mountains loom as the ultimate test of her runner’s heart, while her parents hope that so much beauty, so much grandeur, will somehow repair a damaged marriage. But when Caitlin and her younger brother, Sean, go out for an early morning run and only Sean returns, the mountains become as terrifying as they are majestic, as suddenly this family find themselves living the kind of nightmare they’ve only read about in headlines or seen on TV. Written with a precision that captures every emotion, every moment of fear, as each member of the family searches for answers, Descent is a perfectly crafted thriller that races like an avalanche toward its heart-pounding conclusion.

The Secret Wisdom of the Earth by Christopher Scotton
Signed copies available! Kirkus Reviews: “Debut author Scotton sets a captivating modern morality tale in Kentucky’s coal country, 1985.With the small-town aura of To Kill a Mockingbird, a man reflects on the summer he learned that tradition, greed, class, race and sexual orientation can make for murder.”

Her by Harriet Lane
Isolated and exhausted by early motherhood, Emma finds her confidence is fading fast. Nina is sophisticated and assured, a successful artist who seems to have it all under control. And yet, when the two women meet, they are irresistibly drawn to each other. As the friendship develops, as Emma gratefully invites Nina into her life, it emerges that someone is playing games – and the stakes could not be higher.

The Partnership: Brecht, Weill, Three Women, and Germany on the Brink by Pamela Katz
Among the most creative and outsized personalities of the Weimar Republic, that sizzling yet decadent epoch between the Great War and the Nazis’ rise to power, were the renegade poet Bertolt Brecht and the rebellious avant-garde composer Kurt Weill. These two young geniuses and the three women vital to their work—actresses Lotte Lenya and Helene Weigel and writer Elizabeth Hauptmann—joined talents to create the theatrical and musical masterworks The Threepenny Opera and The Rise and Fall of the City of Mahagonny, only to split in rancor as their culture cracked open and their aesthetic and temperamental differences became irreconcilable. The Partnership  tells their full story.

A Man of Good Hope by Jonny Steinberg
In January 1991, when civil war came to Mogadishu, the capital of Somalia, two-thirds of the city’s population fled. Among them was eight-year-old Asad Abdullahi. His mother murdered by a militia, his father somewhere in hiding, he was swept alone into the great wartime migration that scattered the Somali people throughout sub-Saharan Africa and the world. This book tells Asad’s story, from a childhood living in a bewildering number of places to an adulthood of financial and romantic success

I Think You’re Totally Wrong: A Quarrel by David Shields and Caleb Powell
Shields and Powell spent four days together at a cabin in the Cascade Mountains, playing chess, shooting hoops, hiking to lakes and an abandoned mine; they rewatched My Dinner with Andre and The Trip, relaxed in a hot tub, and talked about everything they could think of in the name of exploring and debating their central question about Live v. Art: marriage, family, sports, sex, happiness, drugs, death, betrayal–and, of course, writers and writing.

It Was Me All Along by Andie Mitchell
All her life, Andie Mitchell had eaten lustily and mindlessly. But when she stepped on the scale on her twentieth birthday and it registered a shocking 268 pounds, she knew she had to change the way she thought about food and herself; that her life was at stake. This book takes Andie from working class Boston to the romantic streets of Rome, from morbidly obese to half her size, from seeking comfort in anything that came cream-filled and two-to-a-pack to finding balance in exquisite (but modest) bowls of handmade pasta.

The Martini Shot: A Novella and Stories by George Pelecanos
In the title novella – which takes its name from Hollywood slang for the last shot of the day, the one that comes before the liquor shots begin – we go behind the scenes of a television cop show, where a writer gets caught up in a drama more real than anything he could have conjured for a script.

As Chimney Sweepers Come to Dust: A Flavia de Luce Novel by Alan Bradley
Youthful chemist and aspiring detective Flavia de Luce once again brings her knowledge of poisons and her indefatigable spirit to solve dastardly crimes — but this time, she leaves behind her beloved English countryside, and takes her sleuthing prowess to the unexpectedly unsavory world of Canadian boarding schools.

The Accident by Chris Pavone
Now in paperback! Scott M. says: “Pavone hooks us immediately with an anonymous author finishing up his nonfiction book. The book centers on a crime that could rock both the financial world and the CIA. When the agency gets wind of it, they decide to stop the information from getting out by any means necessary. Caught in their sight is Isabella Reed, a literary agent handling the mysterious manuscript. Pavone keeps us in suspense about who will survive, what the information in the book is, and the identity of the author, all in the span of one tense day.”

Astonish Me by Maggie Shipstead
This is the story of Joan, a young American dancer who helps a Soviet ballet star, the great Arslan Rusakov, defect in 1975. After her relationship with Arslan sours, Joan plots to make a new life for herself. She quits ballet, marries a good man, and settles in California with him and their son, Harry. But as the years pass, there is no mistaking that Harry is a prodigy. Through him, Joan is pulled back into a world she thought she’d left behind—back into dangerous secrets, and back, inevitably, to Arslan.

Asia’s Cauldron: The South China Sea and the End of a Stable Pacific by Robert D. Kaplan
Over the last decade, the center of world power has been quietly shifting from Europe to Asia. With oil reserves of several billion barrels, an estimated nine hundred trillion cubic feet of natural gas, and several centuries’ worth of competing territorial claims, the South China Sea in particular is a simmering pot of potential conflict. Kaplan offers up a vivid snapshot of the nations surrounding the South China Sea, the conflicts brewing in the region at the dawn of the twenty-first century, and their implications for global peace and stability.

Arrows of Rain by Okye Ndibe
This debut novel from the author of the powerful, acclaimed Foreign Gods, Inc. looks at a woman’s drowning and the ensuing investigation in an emerging African nation. In the country of Madia (based in part on Ndibe’s native Nigeria) a young prostitute runs into the sea and drowns. The last man who spoke to her, the “madman” Bukuru, is asked to account for her last moments. When his testimony implicates the Madian armed forces, Bukuru is arrested and charged with her death. But a young journalist manages to visit him, and together they journey through decades of history that illuminate Bukuru’s life, and that of the entire nation. A brave and powerful work of fiction, Arrows of Rain is a brilliant dramatization of the complex factors behind the near-collapse of a nation from one of the most exciting novelists writing today.

We post new release picks every week over on our instagram feed. Follow us there and be the first to know what’s new and notable every Tuesday.