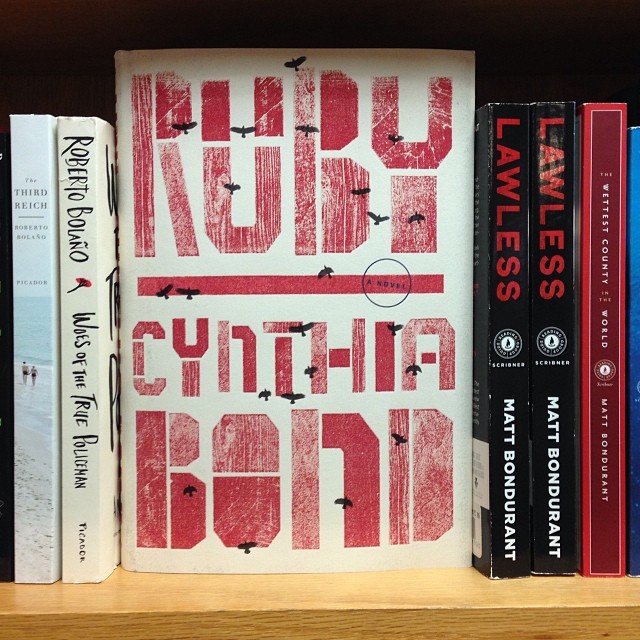 Monday, Monday by Elizabeth Crook
The Statesman Selects Pick of the Month!
Join us for the launch event tonight at 7p!
On an oppressively hot Monday in August of 1966, a student and former marine named Charles Whitman hauled a footlocker of guns to the top of the University of Texas tower and began firing on pedestrians below. Elizabeth Crook’s new novel, Monday Monday follows three students caught up in the massacre.

The Poor Boy’s Game by Dennis Tafoya
Scott’s MysteryPeople New Release Pick of the Day! “I’ve been a fan of this guy since his debut, DOPE THIEF. He’s a criminally underrated author. THE POOR BOY’S GAME should be the book that gets him noticed. It’s down and dirty and still has a lot of heart. Reminiscent of crime films from the 1970s. Tafoya will be leading a free crime fiction writing workshop here at the store this Thursday 5/1 at 6:30pm on our third floor. All are welcome to attend.”

Ruby by Cynthia Bond
When a telegram from her cousin forces her to return to her east Texas home town, thirty-year-old Ruby Bell finds herself reliving the devastating violence of her girlhood. Meanwhile, Ephram Jennings must choose between loyalty to the sister who raised him and the chance for a life with the woman he has loved since he was a boy.

The Girl Who Saved the King of Sweden by Jonas Jonasson
A wildly picaresque new novel from the author of the internationally bestselling The 100-Year-Old Man Who Climbed Out the Window and Disappeared! In a tiny shack in the largest township in South Africa, Nombeko Mayeki is born. She quickly learns that the world expects nothing more from her than to die young. Yet the unstoppable Nombeko pulls off a daring escape to Sweden, where she meets twins named Holger One and Holger Two, who are carrying out a mission to bring down the Swedish monarchy…by any means necessary.

The Texas Food Bible by Dean Fearing
Dean Fearing appears here in-store May 6!
Texas restaurater and winner of the James Beard Award for “Best Chef in the Southwest” is here with a new cookbook that shares the top traditional and modern dishes from our Lone Star State.

The Sea Inside by Philip Hoare
Joe’s New Release Pick of the Day! “I read his previous book, The Whale, and I LOVE IT. I love wovel bovel it. Super excited for this one, Hoare’s exploration of our seas and oceanic life.” From the publisher: In colorful prose and lively line drawings, Hoare sets out to rediscover the sea and its islands, birds, and beasts. As Hoare brilliantly weaves together literary and natural history, we encounter memorable people as well as the dolphins, whales, and other creatures above and below the water.

Stars and Strikes: Baseball and America in the Bicentennial Summer of ‘76 by Dan Epstein
Shappy’s New Release Pick of the Day! “I wish it came with a stick of gum! I’m feeling the Spirit of ’76, baby!” From the publisher: As the nation erupted in a red-white-and-blue explosion saluting its 200th year of independence, Major League Baseball players waged a war for their own liberties by demanding free agency. Stars and Strikes tracks the tumultuous year after which the sport, and the nation, would never be the same.

Let’s Just Say It Wasn’t Pretty by Diane Keaton
From Academy Award winner and bestselling author Diane Keaton comes a candid, hilarious, and deeply affecting look at beauty, aging, and the importance of staying true to yourself—no matter what anyone else thinks.

Russian Roulette: How British Spies Thwarted Lenin’s Plot for Global Revolution by Giles Milton
Miles tells the spectacular and harrowing story of the British spies in revolutionary Russia and their mission to stop Lenin’s red tide from washing across the free world.

Clean Eats: Over 200 Delicious Recipes to Reset Your Body’s Natural Balance and Discover What It Means to Be Truly Healthy by Alejandro Junger, M. D. by Alejandro Junger
Clean Eats has everything you need to enjoy delicious, nutritious, life-enhancing food every day. With practical tips and tools and over 200 recipes, Clean Eats restores what rightfully belongs to you–your health, your vitality, and your peace of mind.

The Cuckoo’s Calling by Robert Galbraith (aka J. K. Rowling)
A debut mystery in a classic vein: Detective Cormoran Strike investigates a supermodel’s suicide. You may think you know detectives, but you’ve never met one quite like Strike. You may think you know about the wealthy and famous, but you’ve never seen them under an investigation like this. 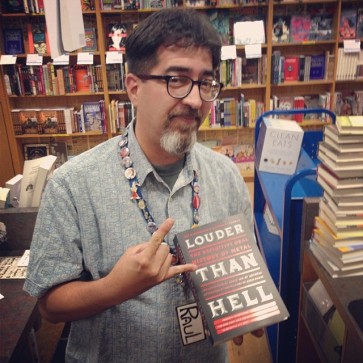 Cooked: A Natural History of Transformation by Michael Pollan
Books & tickets for the signing at our 5/22 event with Pollan are now available!
Pollan explores the previously uncharted territory of his own kitchen & discovers the enduring power of the four classical elements–fire, water, air, and earth–to transform the stuff of nature into delicious things to eat and drink.

Frozen in Time: An Epic Story of Survival and a Modern Quest for Lost Heroes of World War II by Mitchell Zuckoff
A gripping true story of survival, bravery, and honor in the vast Arctic wilderness during World War II, from the bestselling author of Lost in Shangri-La.

The WORN Archive edited by Serah-Marie McMahon
A manifesto on why fashion and clothing matter. For eight years, the Canadian magazine has investigated the intersections of fashion, pop culture, and art. The four-hundred-page book features the best content from the journal’s first fourteen issues, assembled by WORN founder and editor in chief.