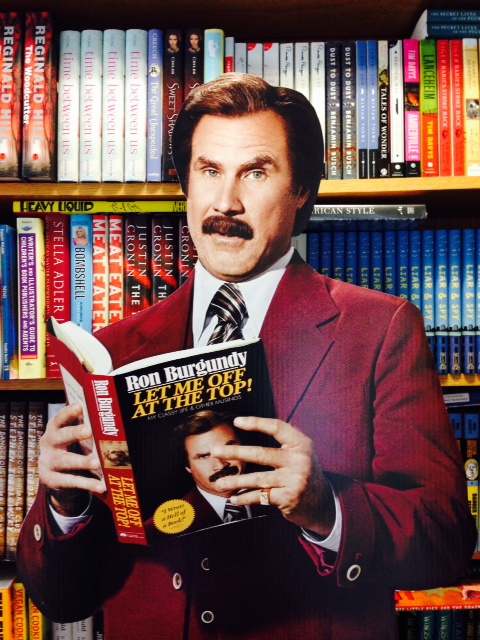 Let Me Off at the Top: My Classy Life & Other Musings, the riveting new memoir from Anchorman and Literary Legend Ron Burgundy, hits our shelves in a storm of mahogany-scented wonder this Tuesday, November 19. In the most highly anticipated book of the year, Burgundy reveals his most private thoughts, his triumphs and his disappointments. He takes us from his boyhood in a desolate Iowa coal-mining town to his years at Our Lady Queen of Chewbacca High School. Let us tell you – it’s one wild ride.

Pre-order your tickets to the gun show right here and we’ll have one of these puppies waiting for you when they come out of the box Tuesday morning. In the mean time, we’ve landed a not at all exclusive interview with the man behind the book jacket – Ron Burgundy.

What aspects of your childhood or upbringing have endured with you as your career has taken off? Is there any element from your upbringing that you’ve shed over the years?

Extremely interesting question, yes indeed. In a way I think we are all still children—I mean sure we have to write checks and shave and drink alcohol but inside every one of us there’s a child who’s like, “I don’t want to write checks! I don’t want to shave! I do want to drink alcohol but I don’t want anybody to catch me!” That child lives inside of me very close to the surface. I still get very angry when I have to shave. I’ve thrown temper tantrums and collapsed on the floor when I’m forced to write checks for whatever reason. I’m going to say it. I am pretty close to the boy I was when I was eleven years old. I’ve made a lot of grown-ups mad. I’ll tell you an interesting story. One time I was out on a date with a beautiful woman. This was back when I was in my thirties. We had finished a romantic dinner and the night was heading toward a predictable erotic conclusion. As we entered her apartment I saw that she had an enormous king-sized bed. She began slowly undoing her dress but the anticipation was just too much for me. I couldn’t wait another second. I ran at the bed and jumped up and down on it. I had completely forgotten I was a grown man about to have sex. Instead, the pure childlike excitement of bouncing up and down on that huge bed overtook me and there was nothing I could do. Sometimes that inner child explodes at the wrong time but not often. It was a huge bed and just lots and lots of fun! I must have bounced for a good two hours and then we did it.

What role do you think women play in our society today? Are there any areas that could still be developed more favorably toward them?

To be candid, I think we are ready for a woman president. I’d love to see it. Sure the country would have to suffer through some crazy emotional ups and downs every month and women can be pretty irrational and maybe you would have to make some kind of amendment whereby they would not be allowed to be commander in chief because that could get pretty dicey! A lady in control of the military? I think most women out there would certainly agree that would be pure insanity. But doing the budget and having parties for dignitaries and making bills and stuff—do I think a woman could do that? You bet. I hope she’s sexy. I would hate to see that first woman president be a real dog—not that that would make her any less qualified but she would be more qualified if she were sexy. I hope it’s someone who looks like Jessica Lange in her prime. Boy oh boy, that would be top-drawer stuff—a president who looked like Jessica Lange circa King Kong! Invite me to the Lincoln Bedroom!

Your research on Mexico is exhaustive, but has raised the eyebrows of many anthropologists and archaeologists for its gaps in crucial areas of information. Some have even suggested that certain details were fabricated. Can you speak to these assertions?

Well this hurts and yes I am aware of what some jealous critics are saying. First off, to be fair, I’m not perfect. I could have gotten a fact wrong here or there but let’s not forget—what I’ve written about the history of Mexico in Let Me Off at the Top! is surely the first scholarly work on Mexico ever written. So it seems ridiculous to me to challenge its accuracy when there’s nothing to compare it to. Maybe better histories of Mexico will be written in the future but honest to God I don’t know how. It took me a long time to write just that one chapter as anyone could plainly see. (For those of you who are wondering—I do intend on finishing my complete history of Mexico. Look for it in stores early 2021.)

As far as “anthropologists” and “archaeologists” are concerned they should stick to what they do best and let people who study history do what they do. I’m often accosted on the street by eggheads from universities who want to criticize the way I report the news or just the way I live and really the only thing you can do is bust them in the beak and hope you don’t get your knuckles bloody.

Where did your love for animals originate? Are you currently engaged in any programs or projects dedicated to animal welfare?

Of course I go into great detail about my relationship with animals in my book, Let Me Off at the Top! but I will say this, male koala bears have two penises. It’s utterly true! It doesn’t speak much to your question I know but it’s just amazing. I have these facts squeezed into my head and there’s no room to keep them in there. I have to let them go and voilà, the world benefits!

Has your attitude or relationship to the flute changed at all over the years? Do you have any advice for young musicians today?

I think if you’re just starting out in the music world today you have to be very savvy about how you’re going to make a buck. Do you learn to play jazz? Let’s be honest. I love jazz and I am a great jazz flautist but can you make a buck from it? What about rock? Is there any money in rock? Not much. The kids these days like rap-rhyming. All the money seems to be in rap-rhyming. But here’s the problem. Let’s say you’re just starting out today. Do you practice rap-rhyming? No! You have to guess what’s going to be big by the time you’re grown up. I think Dixieland music is poised to make a huge comeback. It’s got a real beat and cool-sounding banjo and clarinet parts. It’s just perfect for a redo. If I were starting out in music today I would get my Dixieland band chops down pat and get ready for the big wave coming. I think a great name for a Dixieland band would be the Biloxi Skillet Lickers. Also the Tennessee Bearcat 7. They are both equally very good names.

It seems that you and Veronica Corningstone have been enjoying a fruitful marriage, but there are several instances, particularly one in your chapter “I Dish the Dirt!” that imply you’ve had extramarital affairs. Does this suggest a kind fluidity in your relationship? What are your views on marriage today?

I am a strong believer in monogamous relationships. I feel that marriage between a man and a woman, a man and a man or a woman and a woman is a sacred and special bond. My relationship with Veronica is such a bond. I could count on just two hands the number of times I’ve gone outside of the marriage for sex. That’s ten times or less so I think you can see I’m a pretty dedicated husband. Only one of those times was I actually in love with the woman and she turned out to be a real pain in the ass so I was lucky to have Veronica standing by when that fell through. Veronica of course has gone outside of the marriage herself a few times but come on! Really? Imagine you’re a woman and you’re married to Ron Burgundy. How long could you stay away? Not long, right. Veronica on occasion would meet NFL football legend Frank Gifford for a quickie but then he was married too so that made it okay. Besides, I’ve always liked Gifford, and his wife, Kathy, was a real wildcat in the sack.

Your rapport with an array of notable public figures is impressive. Have any of these friendships or relationships endured?

I remain friends with so many famous people. I hate to drop names and brag. It’s just not my nature. I do think it’s important to say that I’m great friends with Hollywood legend, Richard Thomas. I did a guest spot on the television show, The Waltons once. The only dramatic acting I’ve ever attempted. I was simply terrible. I’m just not a good actor but Richard talked me through the whole ordeal and we’ve been friends ever since. I have one of his kidneys.

Copies of Let Me Off At The Top will be available on our shelves Tuesday, November 19. You can pre-order yours now via bookpeople.com.

One thought on “BREAKING: A (Not At All) Exclusive Q&A with Anchorman & Literary Legend Ron Burgundy”