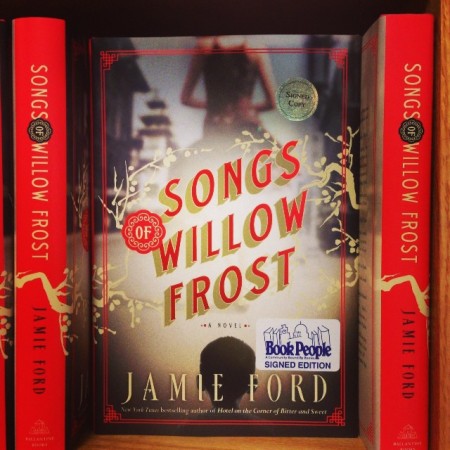 In the afterword to his new novel Songs of Willow Frost, Jamie Ford describes “beautiful melancholy” as his constant writing partner. His niche was built directly into the title of his stellar debut, Hotel on the Corner of Bitter and Sweet, which is as much a career-spanning mission statement as it is a book title. Triumph and heartbreak aren’t quite as obvious in Songs of Willow Frost, but the lives of its characters are equally as driven by forces both bitter and sweet. Ford’s multi-generational tale opens on William Eng, an orphaned pre-teen living in Depression-era Seattle. He’s old enough to have vague memories of his mother, including the terrible night on which he was taken from her, but doesn’t know (and can’t get from the imposing nuns in charge of the orphanage) enough to know whether or not he can ever hope to see her again. And then he goes to the movies.

Sitting in the dark with his friends on the one day a year all the boys get to go to the theater, William watches a film starring the mysterious and beautiful Willow Frost – mysterious to everyone, that is, but him. He knows his ah-ma when he sees her, and vows to find her when she’s in town with her traveling troupe the following week. Ford moves the plot quickly through the nerve-wracking lead-up to William’s meeting with Willow, making their first encounter surreal for characters and reader alike. The pace of the novel, it turns out, matches the stories Willow has to tell William. Their meeting was never the heart of this story, though it is crucial for both characters. William piecing together his early life, his mother’s disappearance, and his feelings about love and trust are the epicenter from which all other action ripples, and Ford’s leaps backward in time reveal just enough to beg questions that only forward motion can reveal.

This is not an easy book to read, on many levels. Willow’s history is fraught with illness, abuse, and disenfranchisement at the hands of a racist city that refused to treat Chinese women in hospitals, routinely forced sterilization upon minority populations, and removed healthy children from single-mother homes for “morality” reasons. As a native Seattleite, I cringed through many of this book’s 320 pages; just because Seattle is home to one of the country’s most vibrant Chinatowns does not mean that it has treated its citizens humanely. Ford, who grew up in and  around the neighborhoods about which he writes, does not shy from his city’s history, for better and worse. The sights, sounds, and smells of the Great Depression in a port town vibrate off the page with the same intensity as William and Willow’s emotions. Ford is a careful writer, who discernibly strives for a poetic turn of phrase. His attention to detail is this novel’s saving grace. It would have been easy for Songs of Willow Frost to be consumed by the epic nature of the tragedies inherent to its protagonists’ lives, but in Ford’s confident, poetic voice, it stays exactly where it should: at eye level with a pair of human hearts.
_____________________________________________

Copies of Song of Willow Frost are available on our shelves and BookPeople and via bookpeople.com. Signed copies available while supplies last.

3 thoughts on “SONGS OF WILLOW FROST: Eye Level With A Pair of Hearts”