Psychohistory: the science of using mathematics and statistics tempered with sociology and psychology to predict the social outcomes of a large human population.

This is the branch of mathematics that Hari Seldon, the first of many protagonists for Isaac Asimov’s Foundation series, uses to uncover that the Galactic Empire, the quadrillions of souls stretching across a galaxy over the past 12,000 years, is slowly crumbling from the inside out.  Once it collapses, according to Seldon, the Empire will fall into a dark age that will last 30,000 years—unless there is an intervention.

So begins Asimov’s critically acclaimed Foundation series.  It was originally published as a series of short stories in Astounding Magazine between May 1942 and January 1950, and then picked up and published proper by Gnome Press in 1951.  Foundation and Empire and Second Foundation were written and published in the next two years, comprising what was known for decades as the “Foundation Trilogy”.

Asimov was originally inspired to write Foundation after reading The Rise and Fall of the Roman Empire by Edward Gibbon.  The Galactic Empire, at the height of its historical glory, is already rotting on the inside and is doomed to fall, much like the Roman Empire all of those many years ago.  What, wonders Seldon, if there was a way to foresee the path that humanity would tread?  And if we were to see that path, and follow it down its destructive course, would there be anything we could do to change that?  The Galactic Empire is too far gone to be saved, but there is a way to avoid those seemingly inevitable millennia of darkness.  Hari Seldon’s plan is to put a population of scientists and historians out on the periphery of the galaxy to compile a Galactic Encyclopedia that contains all of humanity’s knowledge and achievements up to that point. 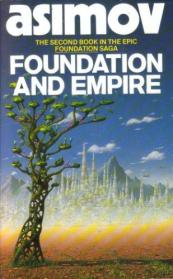 Seldon, using his great intellect and this new science, predicts the course that this new Foundation will take, and does his best to pre-arrange and then predict how the mob mentality of the Foundation and the surrounding worlds will guide this small sub-sect of humanity.  The first 200 years or so are chronicled in Foundation, which actually ends quite abruptly, almost as if Asimov got tired of creating his story and decided that was going to be it for the time being.  Fortunately, he published soon thereafter Foundation and Empire, which continues the story for only about 100 years more, though those years introduce an unexpected curve ball, so to speak.  The third book, Second Foundation, spans another 100 years or so, and ends without reaching the conclusion of the “Seldon Plan” but leaves the reader mostly satisfied as to where things might continue after the final page is turned.

I don’t want to give too much away, so I won’t get too specific.  There is such a complex history covered in these relatively short books, full of interesting characters and unexpected events, and it all takes place on an intergalactic scale.  To tell this long history, Asimov favors a writing style that strings together short vignettes and brief glimpses of important moments that build on each other and tell a complete narrative.  As such, there are no main characters, other than perhaps Hari Seldon and his Plan.  Seldon appears as a holographic pre-recorded message from time to time, and for a while, the Foundation is right on track.  Soon, Asimov’s characters question whether or not they have free will, or whether they are merely subject to events beyond their control.  What Seldon stresses is that his plan only works on a large population, and that individuals don’t play an important role.  However, I would argue that in every case when a “Seldon Crisis” arises, which is in every single book, it is the individuals with prescience and an understanding of human psychology who maneuver circumstances in such a way that only one end result is possible.  So it is through both the collective mob mentality, and the subtle individual intervention that humanity is propelled forward on its inevitable path. 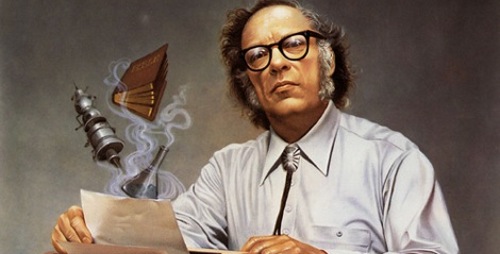 Asimov was an extremely accomplished intellectual and an intelligent person to boot, and it shows in his writing.  The cleverness and dexterity with which he maps out this story of humanity is impressive.  In fact, this series was so well-respected and lauded that the Hugo Association created a special award, the “Best All-Time Series” in 1966 and awarded the original three Foundation books with this honor.  It has not been given again since.  I definitely think this series is worth reading, and if you like the original trilogy, Asimov wrote even more books about the Foundation and Hari Seldo, and there are even some spinoff books using the Foundation Universe as a launching pad.

As an aside, I don’t think it’s really even possible to award a best of “all time” anything, since as far as I can tell, time is still ticking away…

Sci Friday is a weekly post focusing on all things Sci Fi. Booksellers Tommy and Marie are you intrepid leaders on this journey through awesome new books; the best and worst of what’s come before; Sci Fi film adaptations and more. Check back next Friday for more!