Gene editing, true crime, ghost stories, and love. That’s just a preview of what awaits you the next time you shop with us in-store and online. Read more about the titles hitting our shelves this week! 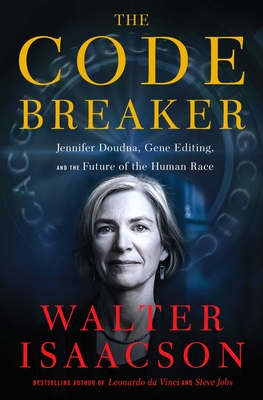 The Code Breaker: Jennifer Doudna, Gene Editing, and the Future of the Human Race by Walter Isaacson

The bestselling author of Leonardo da Vinci and Steve Jobs returns with a gripping account of how Nobel Prize winner Jennifer Doudna and her colleagues launched a revolution that will allow us to cure diseases, fend off viruses, and have healthier babies.

When Jennifer Doudna was in sixth grade, she came home one day to find that her dad had left a paperback titled The Double Helix on her bed. She put it aside, thinking it was one of those detective tales she loved. When she read it on a rainy Saturday, she discovered she was right, in a way. As she sped through the pages, she became enthralled by the intense drama behind the competition to discover the code of life. Even though her high school counselor told her girls didn’t become scientists, she decided she would.

Driven by a passion to understand how nature works and to turn discoveries into inventions, she would help to make what the book’s author, James Watson, told her was the most important biological advance since his co-discovery of the structure of DNA. She and her collaborators turned ​a curiosity ​of nature into an invention that will transform the human race: an easy-to-use tool that can edit DNA. Known as CRISPR, it opened a brave new world of medical miracles and moral questions.

The development of CRISPR and the race to create vaccines for coronavirus will hasten our transition to the next great innovation revolution. The past half-century has been a digital age, based on the microchip, computer, and internet. Now we are entering a life-science revolution. Children who study digital coding will be joined by those who study genetic code.

Should we use our new evolution-hacking powers to make us less susceptible to viruses? What a wonderful boon that would be! And what about preventing depression? Hmmm…Should we allow parents, if they can afford it, to enhance the height or muscles or IQ of their kids?

After helping to discover CRISPR, Doudna became a leader in wrestling with these moral issues and, with her collaborator Emmanuelle Charpentier, won the Nobel Prize in 2020. Her story is a thrilling detective tale that involves the most profound wonders of nature, from the origins of life to the future of our species. 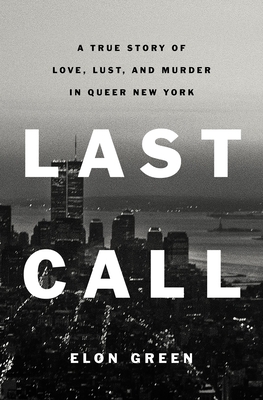 The gripping true story, told here for the first time, of the Last Call Killer and the gay community of New York City that he preyed upon.

The Townhouse Bar, midtown, July 1992: The piano player seems to know every song ever written, the crowd belts out the lyrics to their favorites, and a man standing nearby is drinking a Scotch and water. The man strikes the piano player as forgettable.

He looks bland and inconspicuous. Not at all what you think a serial killer looks like. But that’s what he is, and tonight, he has his sights set on a gray haired man. He will not be his first victim.

Nor will he be his last.

The Last Call Killer preyed upon gay men in New York in the ‘80s and ‘90s and had all the hallmarks of the most notorious serial killers. Yet because of the sexuality of his victims, the skyhigh murder rates, and the AIDS epidemic, his murders have been almost entirely forgotten.

This gripping true-crime narrative tells the story of the Last Call Killer and the decades-long chase to find him. And at the same time, it paints a portrait of his victims and a vibrant community navigating threat and resilience. 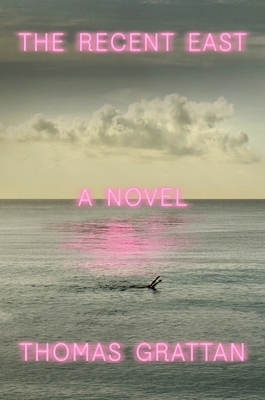 The Recent East: A Novel by Thomas Grattan

Shortly after the fall of the Berlin Wall, Beate Haas, who defected from East Germany as a child, is notified that her parents’ abandoned mansion is available for her to reclaim. Newly divorced and eager to escape her bleak life in upstate New York, where she moved as an adult, she arrives with her two teenagers to discover a city that has become an unrecognizable ghost town. The move fractures the siblings’ close relationship, as Michael, free to be gay, takes to looting empty houses and partying with wannabe anarchists, while Adela, fascinated with the horrors of the Holocaust, buries herself in books and finds companionship in a previously unknown cousin. Over time, the town itself changes—from dismantled city to refugee haven and neo-Nazi hotbed, and eventually to a desirable seaside resort town. In the midst of that change, two episodes of devastating, fateful violence come to define the family forever.

Moving seamlessly through decades and between the thoughts and lives of several unforgettable characters, Thomas Grattan’s spellbinding novel is a multigenerational epic that illuminates what it means to leave home, and what it means to return. Masterfully crafted with humor, gorgeous prose, and a powerful understanding of history and heritage, The Recent East is the profoundly affecting story of a family upended by displacement and loss, and the extraordinary debut of an empathetic and ambitious storyteller. 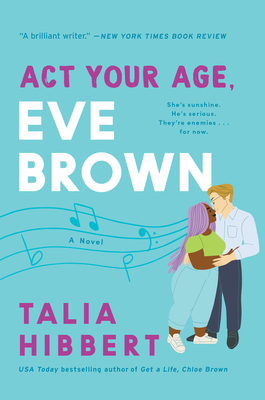 In USA Today bestselling author Talia Hibbert’s newest rom-com, the flightiest Brown sister crashes into the life of an uptight B&B owner and has him falling hard—literally.

Eve Brown is a certified hot mess. No matter how hard she strives to do right, her life always goes horribly wrong. So she’s given up trying. But when her personal brand of chaos ruins an expensive wedding (someone had to liberate those poor doves), her parents draw the line. It’s time for Eve to grow up and prove herself—even though she’s not entirely sure how…

Jacob Wayne is in control. Always. The bed and breakfast owner’s on a mission to dominate the hospitality industry and he expects nothing less than perfection. So when a purple-haired tornado of a woman turns up out of the blue to interview for his open chef position, he tells her the brutal truth: not a chance in hell. Then she hits him with her car—supposedly by accident. Yeah, right.

Now his arm is broken, his B&B is understaffed, and the dangerously unpredictable Eve is fluttering around, trying to help. Before long, she’s infiltrated his work, his kitchen—and his spare bedroom. Jacob hates everything about it. Or rather, he should. Sunny, chaotic Eve is his natural-born nemesis, but the longer these two enemies spend in close quarters, the more their animosity turns into something else. Like Eve, the heat between them is impossible to ignore… and it’s melting Jacob’s frosty exterior. 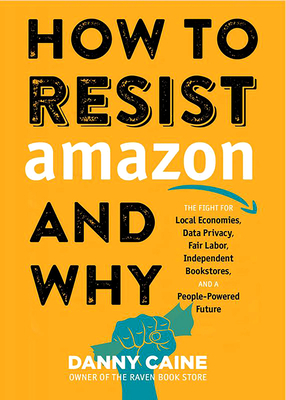 How to Resist Amazon and Why by Danny Caine

When a company’s workers are literally dying on the job, when their business model relies on preying on local businesses and even their own vendors, when their CEO is the richest person in the world while their workers make low wages with impossible quotas… wouldn’t you want to resist? Danny Caine, owner of Raven Book Store in Lawrence, Kansas has been an outspoken critic of the seemingly unstoppable Goliath of the bookselling world: Amazon. In this book, he lays out the case for shifting our personal money and civic investment away from global corporate behemoths and to small, local, independent businesses. Well-researched and lively, his tale covers the history of big box stores, the big political drama of delivery, and the perils of warehouse work. He shows how Amazon’s ruthless discount strategies mean authors, publishers, and even Amazon themselves can lose money on every book sold. And he spells out a clear path to resistance, in a world where consumers are struggling to get by. In-depth research is interspersed with charming personal anecdotes from bookstore life, making this a readable, fascinating, essential book for the 2020s. 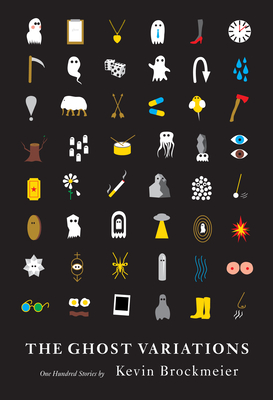 The Ghost Variations: One Hundred Stories by Kevin Brockmeier

Ghost stories tap into our most primal emotions as they encourage us to confront the timeless question: What comes after death? Here, in tales that are by turn scary, funny, philosophic, and touching, you’ll find that question sharpened, split, reconsidered—and met with a multitude of answers.A spirit who is fated to spend eternity reliving the exact moment she lost her chance at love, ghostly trees that haunt the occupant of a wooden house, specters that snatch anyone who steps into the shadows, and parakeets that serve as mouthpieces for the dead: these are just a few of the characters in this extraordinary compendium of one hundred ghost stories. Kevin Brockmeier’s fiction has always explored the space between the fantastical and the everyday with profundity and poignancy. As in his previous books, The Ghost Variations discovers new ways of looking at who we are and what matters to us, exploring how mysterious, sad, strange, and comical it is to be alive—or, as it happens, not to be. 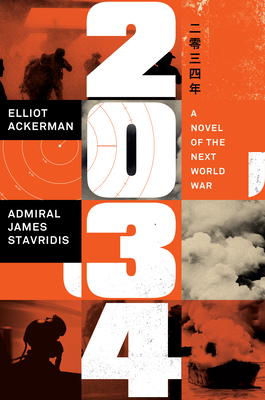 2034: A Novel of the Next War by Elliot Ackerman

From two former military officers and award-winning authors, a chillingly authentic geopolitical thriller that imagines a naval clash between the US and China in the South China Sea in 2034–and the path from there to a nightmarish global conflagration.

On March 12, 2034, US Navy Commodore Sarah Hunt is on the bridge of her flagship, the guided missile destroyer USS John Paul Jones, conducting a routine freedom of navigation patrol in the South China Sea when her ship detects an unflagged trawler in clear distress, smoke billowing from its bridge. On that same day, US Marine aviator Major Chris “Wedge” Mitchell is flying an F35E Lightning over the Strait of Hormuz, testing a new stealth technology as he flirts with Iranian airspace. By the end of that day, Wedge will be an Iranian prisoner, and Sarah Hunt’s destroyer will lie at the bottom of the sea, sunk by the Chinese Navy. Iran and China have clearly coordinated their moves, which involve the use of powerful new forms of cyber weaponry that render US ships and planes defenseless. In a single day, America’s faith in its military’s strategic pre-eminence is in tatters. A new, terrifying era is at hand.

So begins a disturbingly plausible work of speculative fiction, co-authored by an award-winning novelist and decorated Marine veteran and the former commander of NATO, a legendary admiral who has spent much of his career strategically outmaneuvering America’s most tenacious adversaries. Written with a powerful blend of geopolitical sophistication and human empathy, 2034 takes us inside the minds of a global cast of characters–Americans, Chinese, Iranians, Russians, Indians–as a series of arrogant miscalculations on all sides leads the world into an intensifying international storm. In the end, China and the United States will have paid a staggering cost, one that forever alters the global balance of power.

Everything in 2034 is an imaginative extrapolation from present-day facts on the ground combined with the authors’ years working at the highest and most classified levels of national security. Sometimes it takes a brilliant work of fiction to illuminate the most dire of warnings: 2034 is all too close at hand, and this cautionary tale presents the reader a dark yet possible future that we must do all we can to avoid.

Tyll: A Novel by Daniel Kehlmann

Recollections of My Nonexistence: A Memoir by Rebecca Solnit