Mat and Jason curate a display in our cooking section and write a column about their favorite culinary books for the blog. Here it is, the second edition of “Crazy from the heat”:

Ok … This is not really a holiday issue of our cookbook/cooking/food/griping blog. It is, however, the holiday season, so we are covering up our procrastination by implying that we have put a lot of thought into this post of “holiday” cookbook hints. (We totally haven’t.) So, let us dive right in.

If you’ve ever spent a Saturday afternoon watching old horror movies, you know who Vincent Price is. If you don’t know who Vincent Price is, please immediately go and spend a Saturday afternoon watching old horror movies and then come back and read this blog. As well as being an internationally well-known actor, Mr. Price considered himself a gourmet (and rightfully so). Cooking Price-Wise was recently re-released in its mostly original glorious form, full of over saturated color pictures, Price’s puns and recipes for old school vittles, like rack of lamb and hams with British flag designs on them. The book came out to accompany a show he did for British television in the early 70’s. In this scene from the show, Chef Price feeds a finicky theatre critic:

Okay … This is not from the TV show. It’s a clip from Theatre of Blood, Price’s 1973 revenge masterpiece.

Mr. Bronson is a rapper who used to be a chef. He now tours around with his buddies spinning tunes for his fans and eating large amounts of great food all over the world. This book is an offshoot of his Vice TV show of the same name. To his credit, Mr. Bronson does not really claim any great chefiness and gives mad props to the people who create the food he happily devours on the show.  The book is fun and actually gives some good cooking pointers (like how to cook an octopus).

Plus, he makes fun of Guy Fieri, so he wins points from us on that matter: 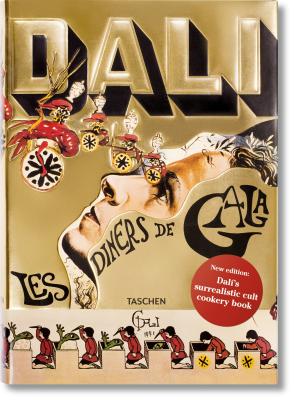 Salvador Dali’s Les Dîners de Gala is a masterpiece of weirdness. It was originally published in 1973 for a fairly small run and was unavailable until recently when those artistic lunatics at Taschen reissued it in all of its glory.

Are you tired of talking-head-glorified-cook-celebrities hocking their latest take on how to cleanse your soul by eating only kale and unborn calf liver? What about books that claim to teach you how to cook a turkey in 11 minutes, or get on a waiting list to sample a $7000 tasting menu served by albino seals on an iceberg?

Les Dîners de Gala, to the rescue! This book is a trip; equal parts art and artifact. It’s like a surrealist time capsule, overflowing with the face meltingly weird freak-ery that is Dali’s art, recipes and ingredients from a time and place beyond, and a self-proclaimed “intellectual exuberance” and “dionysiac jubilation.” It might sound bizarre to call a cookbook mystical. Oh well, there you have it: Les Dîners de Gala is mystical. It possesses a kind of gastronomic decadence the likes of which we may never see again … not to mention it may be the acme of 1970’s food photography. And yet, as if all that were not enough, there is this plum of an epigraph:

“We intend to ignore those charts and tables in which chemistry takes the place of gastronomy. If you are a disciple of one of those calorie-counters who turn the joys of eating into a form of punishment, close this book at once; it is too lively, too aggressive and far too impertinent for you.”

Aggressive and impertinent, you say? AMEN! To celebrate, get the book and watch Bunuel and Dali’s surreal film Un Chien Andalou:

How to Cook a Wolf by M.F.K. Fisher 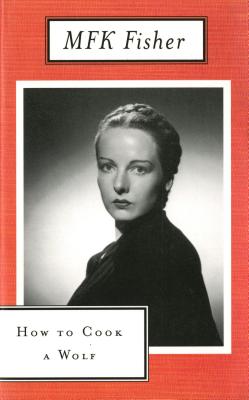 We are not sure if, in the 75 years since How to Cook a Wolf was first published, there has been a better or more eloquent book written on the subject of sensible and economical cooking.

There certainly hasn’t been a more lyrical or whimsical one. Though many things have changed in that time (perhaps some of the cuisine is less en vogue these days … tsk, tsk), Fisher’s words remain as relevant as ever. Her cheeky, urbane wit and charm have not lost any luster over the years, nor has the importance of what is at the heart of this book — that eating economically does not have to be painful; that it does not have to equate to scrimping and shortcuts; and, most of all, it does not have to be either boring or monotonous. Her recipes are simple and easy to follow, yet wildly varied and delicious. In particular, she has a number of game recipes that should be immediately thrust into the hands of hunters everywhere. (No, wolf is not a literal thing to be cooked — calm down!) How to Cook a Wolf is poetic proof that objectively good taste never goes out of style. 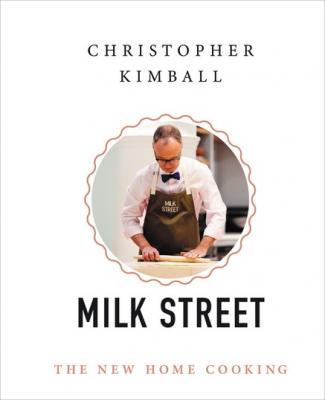 Ok … lest you think we are dwelling in the past, watching Vincent Price cook poodles, having psilocybin dreams of sliced eyeballs cooked in a cream sauce, cavorting with wolves and watching gigantic rappers eat entire pizzas folded in half … well, our final selection really is a perfect book to buy someone for the holidays that will really get used, grimy and stained in the kitchen.

Christopher Kimball of America’s Test Kitchen fame has a new project. The Milk Street project is a cookbook, a school, a web site, a magazine, a way of thinking pure and lofty thoughts about food:

We both managed to snake advanced reader copies of this book a few months before it came out unbeknownst to each other. We immediately asked each other if we had seen the new Kimball project book … it’s enlightening, vibrant, just fucking useful. If you really only buy one cookbook this year, this is the one — but you should buy more. We had a conversation about the book over time.

Mat: For too long cookbooks have been about exclusivity. Born of the idea that “cooking is the universal language of the human spirit,” Christopher Kimball’s Milk Street is a deft tapestry of essential ideas, recipes and techniques that could become the singular cookbook for home cooks everywhere. Milk Street is intent on breaking down barriers, real and imagined, with a bold simplicity and wit that verges on poetry. After all, a poem hopes to be at the center of human experience, but a meal is the experience from which everything emanates. It isn’t hyperbolic to say that Milk Street could find its way abreast such giants as Joy of Cooking and Mastering the Art of French Cooking. In fact, it has already supplanted them, if for nothing else than its ease of use and its eschewing of myopia. This is a cookbook that chefs everywhere will hate not having written themselves.

Jason: It’s a celebration of meal times. When we come together and break bread, toast a marshmallow, dig a carrot out of the ground. My advanced reader is filthy from being opened on my kitchen counter and having shit spilled on it. I have never really used recipes, using cookbooks for inspiration; this one is great for that and I am really looking at the recipes! Now, if Jan from Hachette would send us the real copies she promised us, I can get that one greasy too.

Mat: Right. The things I like most about Milk Street are its simplicity and its modernity —not so much modern in the techniques Kimball uses, but in his push towards global inclusivity. Basically, it’s a more honest representation of how Americans are cooking and eating than has yet been assembled in a cookbook that isn’t the presage of some restaurant chef set out to impress (and this is coming from someone who very much was one of those chefs). Milk Street is the kind of cookbook that dares you to sully its pages; that demands that it live in the kitchen and not on some coffee table or bookshelf. It’s an instant classic; a kind of one-size-fits-all, only-cookbook-you’ll-ever-need for the 21st century.

Jason: It’s universal, everyone gets to play. No matter where you are from or what you like to eat, I dare anyone to not find something that speaks to them in this book.

We both agree that we love this book and the Milk Street project has great potential, but we both really want to know what the fuck happened between Kimball and America’s Test Kitchen; gonna have to let that one play out in the courts I guess.

Where the locals eat:

We want to develop a habit of talking about at least one local restaurant — we gave shoutouts to Justine’s and Vespaio last time. This time, a Lockhart BBQ joint is going to get a little joy from us. Guess what, it’s not Blacks, Kreuz or Smittys, the ones everyone knows about (for mostly good reasons). Nope, this is “Where the locals eat”.

Chisolm Trail BBQ is further down the road from the more famous establishments in the BBQ capital of Texas. Ok, to be fair, he Q itself is not as good as the more well known places, and they always ask if you want mayonnaise on your chopped beef sandwich, which is really horrifying, but it’s a great place to grab a bite because of … the sides … yes, the sides. If we want BBQ, it’s straight to Smitty’s. If we want lunch … it’s Chisolm Trail. They have cucumber salad there … and fried okra … potato salad that does not come out of an HEB tub … green beans … even, get this, salad! Anyway, next time you are wandering that direction, give Chisolm Trail a try, it’s where the locals eat …