Every month, we choose a new book to really get behind and display on our metaphorical Top Shelf. Our hope is that you’ll read this title and encourage others to do the same, creating a sort of ripple effect. Join us on our mission to build a community bound by books! 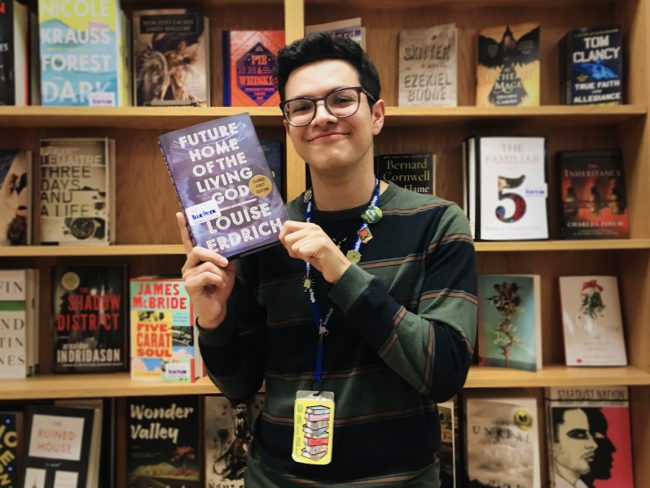 The world in Future Home of the Living God has been turned upside down by a global phenomenon that’s reversed the natural order of evolution. As once-extinct fauna spring from the shadows and women give birth to infants bearing the marks of ancestral hominids, the panic-stricken United States yields power to a government ruled by religious fanaticism. Assured that the answers to all of this turmoil lie in the wombs of women, Congress — headed by the newly-formed Church of the New Constitution —unanimously passes a motion to create a registry of all pregnant women, corral them and study the possible links to the biological event.

Cedar Hawk Songmaker, 26 years old and four months pregnant, finds herself treading paths to discoveries of her own: seeking out her biological Ojibwe parents, coming to terms with the fact that her unborn child may be born with the strange abnormalities, and, upon getting word of armed posses wrangling up pregnant women in public, deciding whether or not she has what it takes to evade capture. Told largely in extended diary entries to her unborn child, Cedar’s story unfolds in a saga that pushes her to her physical and emotional limits.

Future Home of the Living God is an exciting venture into new territory for Louise Erdrich who is best known for her novels concerning Native American life (1984’s Love Medicine, 2012’s The Round House, and, most recently, 2016’s LaRose). The National Book Award winner has written a piece of speculative fiction that feels startlingly original. It never gets bogged down in overly-complicated details and remains true to its protagonist’s hopes and fears, lending tremendous heart to a story that is driven, ultimately, by the compassion and love shared between family, friends, lovers and even complete strangers. And though the novel is a testament to the goodness of humankind, it has an angry edge to it too. Like The Handmaid’s Tale, Future Home of the Living God is an unflinching look at female resilience in the face of adversity, the ties between mother and child. It asks of society how unalienable, if at all, the right to one’s body is.

Yet many will still ask, why this novel? Why now? For Erdrich, the answer was simple. After sitting on the manuscript for 10+ years, she said it was “photographs of white men in dark suits deciding crucial issues of women’s health to know the timing is right” for Cedar’s story to be told. In a time fraught with social and political turmoil over the environment, racial tension, international disorder and questions regarding the rights of women, Future Home of the Living God is a sobering and alarming call to address these concerns before fictional dystopias between the covers manifest themselves in the real world.

One thought on “Top Shelf: ‘Future Home of the Living God’ by Louise Erdrich”