BookPeople is buzzing. Everyone is getting excited about the arrival of Harry Potter and the Cursed Child Parts I and II, so excited that we’re throwing a midnight release party! (Get your vouchers here!) And so excited that one of our booksellers, Melissa, is going back and rereading all of the original seven Harry Potter books and giving us her input on what it’s like to read these treasures as an adult. Check out what she has to say below!

Harry Potter and the Order of the Phoenix: 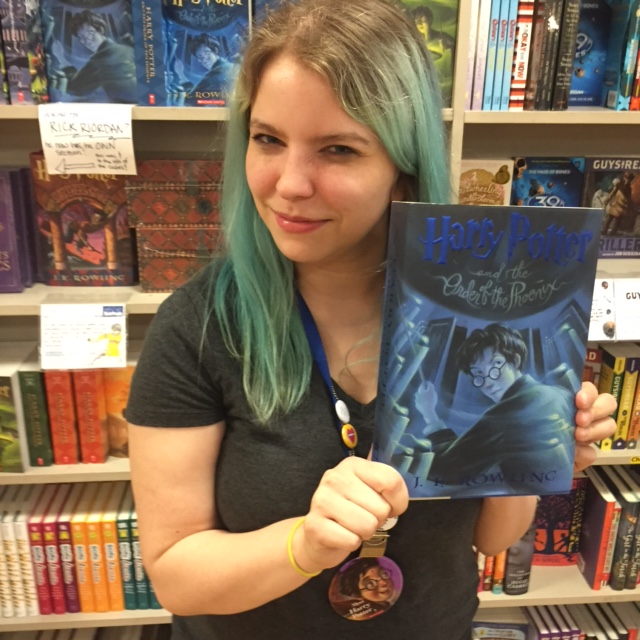 Despite popular opinion, Order of the Phoenix has always been one of my favorites from the series. This book does get a lot of beef about Harry being filled with so much angst, but that is just brilliant writing on JK Rowling’s part! After all, Harry did just witness Voldemort return, Cedric die, and no one is telling him details about something he is very much a part of! All at the ripe age of 15. An adult would be filled with angst with all that tossed at them. And despite all those teenaged emotions, this feels like the first adult book of the series.

One of my favorite parts of this book, more so now than when I was younger, is the introduction of so many important new characters that, looking back, feel like they had been in the story all along. Luna Lovegood is an obvious one. Her strange friendship with everyone is something that I’ve always admired. But now it is something I see as very vital to how our golden trio, and other Potter friends, see the world. Her strangeness, and the acceptance she finds at Hogwarts, is a beautiful thing that I also think makes her a good role model for some of the more interesting, quirky readers. So hooray to JK Rowling for creating such a beautifully weird character! Plus, it is nice to see Harry have more friendships than those with just Ron and Hermione.

Per usual, everything between Harry and Sirius is moving and wonderful to me. Every interaction between the two of them shows so much respect and love that I went back and reread a couple. Lots of people argue that Sirius just saw Harry as a replacement for James, so he didn’t value Harry for Harry. I can’t argue, reading between the lines as an adult, that he doesn’t treat Harry differently than one would normally treat a teenager. But I don’t think it’s because he only sees Harry as James. I think it is because he spent so long thinking that he would never have a valued, strong friendship again, and then here comes Harry James Potter, who cares for him in the same that James always did. Thus making him the cool Godfather, not the person who didn’t fully appreciate Harry. I will always love Sirius Black for his heart of gold, for all his beautiful words of wisdom, and for the sense of fatherhood that he represented for Harry.

Every interaction between Professor McGonagall and Dolores Umbridge is pure gold. Minerva McGonagall is one of the best characters in this book because she just does not take anyone’s sass. And it makes me laugh every time to see how she puts Umbridge in her place. It’s truly one of the best parts of her character, something I always found funny, but never truly appreciated until I was an adult who had to deal with people I just wanted to give nothing but attitude to. I love Minerva McGonagall because she does that with class.

One of the most interesting magical creatures to come out of this incredible series is the Thestral. As a young person I wasn’t as interested in these creatures. It was just a tool for the story. But this time around I was fascinated by the idea of something that no one can see unless they’ve dealt with death. And why is it that only those people can see them? Is it because grief changes the chemical makeup of someone’s brain? Or does the animal seek the person out? I don’t know… I’m sure out there somewhere JK Rowling has explained her thinking behind it, but for now I just find it incredibly intriguing, haunting, and all around just a cool idea for a magical story such as Harry Potter.

I wouldn’t be a good fan to my favorite character if I didn’t talk about their death… even though I don’t want to, and even bringing it up will break my heart. And that is something that will not change with age. Sirius’s death is one of the hardest parts for me to read. When I was a first time reader I went up to my mom and she asked if I was alright. The exact same thing happened as an adult reader, only my boyfriend had to ask if I was ok instead of my mom. I get story wise why JK Rowling had to write it, but that doesn’t mean I will ever be ok with it.

Despite Order of the Phoenix being the longest, I probably read it the fastest. Oh my, how I love this book.

4 thoughts on “Rereading Harry Potter as an Adult: Part 5”